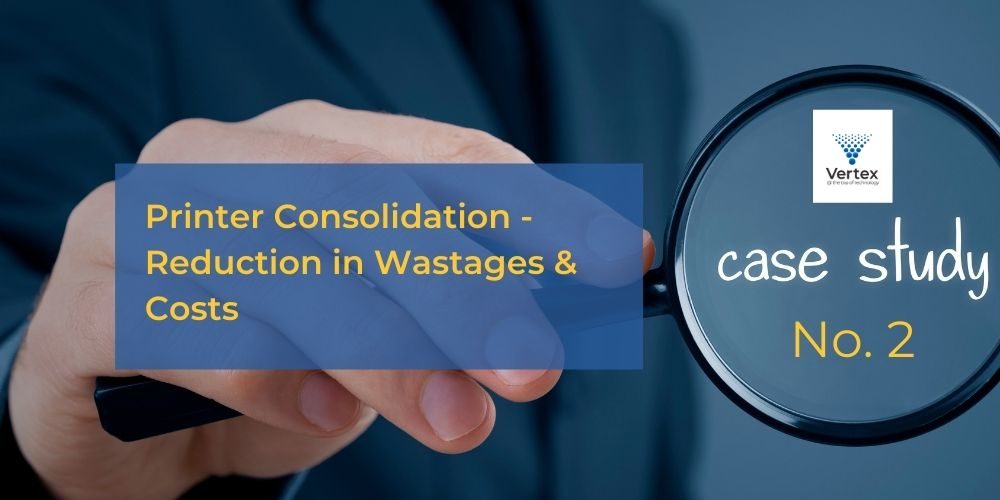 An NBFC Organization that was in the process of planning a major expansion.

To start off with, the client had severe challenges in maintaining their print fleet as there was no mechanism in place to control the misuse and wastage of print activities.

Vertex along with HP did a thorough study of their entire print activities by observing the complex environment of multiple departments spread across various floors, utilizing printers stationed at different corners.

During the organization’s initial inorganic growth phase, there was no accountability of their usage and this led to sizable wastage, financial drain and misuse unbeknownst to the client.

Additionally, the client had to adhere to various security compliances during the planned growth phase and was highly vulnerable with the above-mentioned challenges.

Following were the key findings:

7.   The wastage of consumables posed a drain on capital and a threat to the environment.

Overall, the investment for printers and consumables were sky rocketing, productivity and customer experience were being gravely affected and the client needed to implement necessary measures to control the situation at the earliest.

Following were the steps and plan of action recommended to the client by Vertex:

The above initiatives ensured an eco-friendly and conservative approach. And on evaluation, the client realized an 85% reduction in running costs and a 35-40% increase in productivity.

Organizations and venues such as midsized offices, educational institutions and retail…

The Untold Benefits of Delegation

Numerous surveys across multiple organizations have shown that managers, and in…

HP Inc. received the highest average score out of 29 technology…